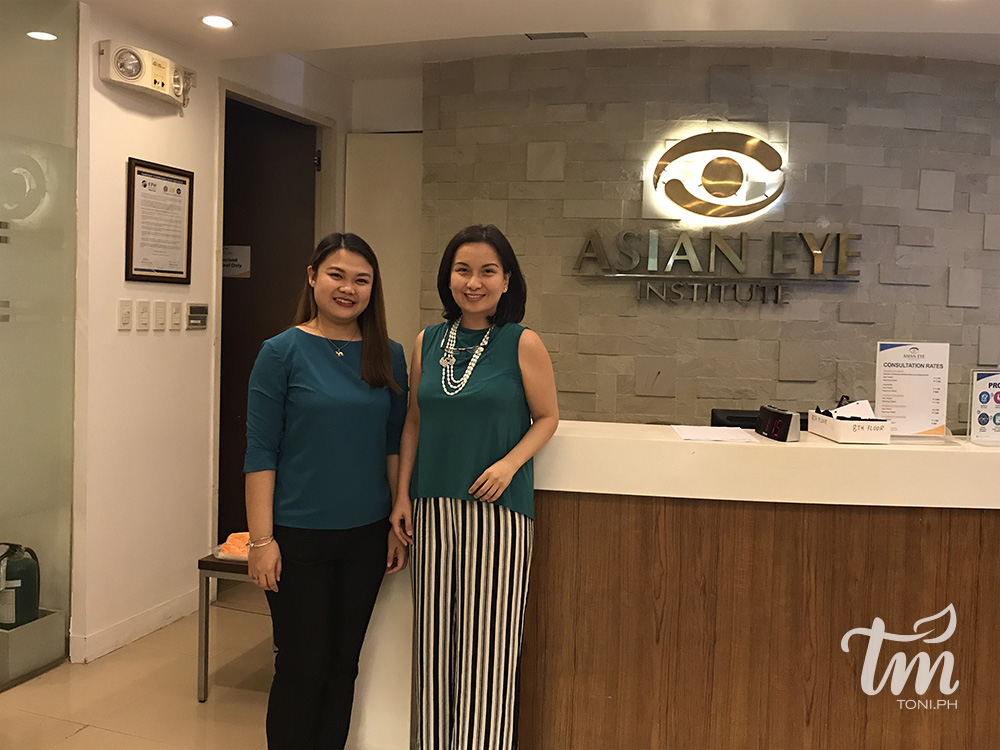 I lost my eye glasses again last September. This is probably the fourth time that it’s happened to me, and every time it does I get really stressed out. How frustrating!

A friend of mine, Yayie, suggested that I have my eyes corrected so I can stop worrying about my bad vision and lost glasses. She recommended that I go for a consultation at Asian Eye Institute. The closest branch to me is the one at Commercenter in Alabang, so that’s where I decided to go.

During my first visit, which happened on September 7th, I went to buy temporary replacement glasses, and to inquire if I am indeed eligible for a Lasik procedure. I also made sure to find out how much the procedure would cost, so that I could be prepared when the time came.

To determine whether or not I was a good candidate for Lasik, I was referred by the Alabang branch to the Rockwell branch of Asian Eye. This is where all screening processes and tests are performed, and also where the actual procedure would be done.

We scheduled my assessment for the following week, September 14th, at 11:00 AM. The entire screening would take half a day. I was advised that my vision would be blurry afterwards, and that it was not advisable to drive. So, on that day, I played it smart and just travelled via Uber.

I arrived 15 minutes early for my screening. Since I was already pre-registered by the Alabang branch, I was ushered in right away to begin my tests. If you want to save on time, I recommend you pre-register as well, instead of coming as a walk-in patient.

The first step of the screening was a refraction test. We started out with the basic test that most glasses-wearing people are familiar with. Once done, we moved on to a more comprehensive test that made use of more sophisticated tools. Through this test, it was discovered that I suffer from hyperopia, also known as farsightedness, astigmatism, and presbyopia. This last one is typically cause by age, and is caused by the hardening of the lens of the eye.

After the refraction test, there was a series of other screening procedures. Here’s a list of them, in case you are curious. If you want to know what each one is for, though, I recommend that you give Asian Eye a call to inquire. They are much better-equipped for that than I am.

To prepare my eyes for all the tests that were to come, three different eye drops were given to me. One was Alcaine, an anesthetic drop to minimize blinking. This was needed for the Corneal Pachymetry, which is the process of measuring corneal thickness, and for the Schirmer’s Test, or the test for dryness of the eyes.

The last was Cyclopenrolate, which I needed for the Cyclorefraction Test. This test involves temporarily paralyzing the muscles in your eye that help you focus, in order to determine your complete refractive error.

For the entire screening process, I was aided by three very competent doctors of Asian Eye Institute, Dr. Emerson Cruz, Dr. Joycelle Remo, and Dr. Louisa Solis. The final assessment and recommendation on which procedure is best for me was done by my eye specialist, Dr. Robert T. Ang.

While waiting for my final recommendation, I was asked by the attending nurse to read and sign an eight-page long Informed Consent Form. Yes, eight whole pages! It can be tempting to skip reading the entire form, but I strongly suggest that you go over it carefully.

In there, you will be given an overview of the steps of the Lasik procedure. There are also notes on safety and the risks involved. It also presents alternatives to Lasik that patients might want to consider, and important information for patients above 40 years old.

I took my time reading in the large waiting area. I really like that there is ample space for sitting and waiting at Asian Eye. Patients also have access to their pantry in case you need to eat. This comes in handy for long procedures like my screening, which took half a day, as I earlier mentioned.

When my assessment was finally complete, Dr. Ang advised me to only get treatment for my lazy eye, which is my left eye. The recommended procedure for me is called Supracor Lasik, which can help correct the need for reading glasses, as well as any distance issues. It’s perfect for my farsightedness and astigmatism.

For the entire Supracor screening procedure, I was billed PHP2,100 plus a doctor’s fee of PHP1,100.

I was asked to come back at 1:00 PM of September 29th for the procedure. Before leaving, I was given detailed instructions indicated on my Refractive Surgery Pre-Operative Form.

The total package price for my procedure was just a little over PHP80,000. Right then and there, I decided that I would go for it.

September 29 came, and my son, Robin, and I were off to Asian Eye Institute once again. I was so thankful that he offered to come with me, and drive back home after the procedure.

Once there, I went straight up to the 10th floor to change into a gown for my procedure. Then, the nurses applied two different drops into my left eye, an analgesic to relieve pain called Acular, and Tobradex to prevent bacterial infection. I was also given one drop of anesthesia.

My right eye, the one that wasn’t going to be treated, was then covered with a patch for protection. Once prepped, I was led to a waiting area, where I rested for a while on a La-Z-Boy chair before my turn.

When it was finally time to begin the treatment, I was brought into the laser room. Dr. Ang was there, together with four more doctors who would assist during the procedure.

The whole thing was very quick and painless. I was asked to lie down and look at a red light. By then, my eye was numb from the drop of anesthesia. A round object was placed around my cornea. I could see it, as if there was a space ship about to land on my eye. I could also clearly hear the laser as it was being administered! It was a little scary, but I made sure to stay brave and just focus on the red light. In about 15 minutes, it was all over.

Afterwards, I was asked to exit the laser room, and two more doctors checked my eye to see if the flap was properly in place. The doctor then gave the first of my three doses of eye drop medications.

I was then asked to wear protective goggles, which I would have to use for one whole week. I also was not allowed to wet my eye or do any strenuous activities immediately after the procedure. Makeup was also discouraged within the first week after Lasik.

With everything done, it was time to settle the bill. Ironically, and also quite funny, my waiting time at the cashier was longer than the time I spent inside the laser room for my procedure!

I was given an appointment slip for the following day for a follow up checkup. This time, it was my husband, John, who accompanied me. My schedule was early in the morning, at 8:30 AM with Dr. Ang.

During this follow-up, he checked my left eye and explained to me that I might feel some discomfort, like a foreign object touching the surface. This is why I needed to continue the prescribed drops for a few days. He also reminded me of all the things I was supposed to avoid doing for the next seven days. Fortunately, I was given clearance to wear make up for an event I had scheduled on October 6, exactly 7 days after my procedure.

From the checkup, John and I went straight to our CCF Class of Glorious Hope. Of course, I was wearing my goggles! Then, on October 6, a week after the procedure, I was able to comfortably host my BNI event already, and also facilitate workshops and seminars for my image consulting business. Amazing!

A month after Lasik, I went back to Asian Eye for another follow up. Dr. Ang was out of the country then, so one of his fellows took care of checking on my left eye. All was well then, with the flap perfectly in place.

It has been about a month and a half now since my Lasik procedure, and I am very happy with my decision to go for it. I no longer get stressed out over having to read fine print. It has also added ease and convenience to my work of facilitating seminars and training sessions for Radiance Image Consultancy, and hosting events. Even every day reading has become easier, like when I need to look at road signs or read the Bible. My blogging is also positively affected by my decision to undergo Lasik. I no longer need to wear glasses while taking photos or using my laptop.

I would consider this a good investment, if there ever was one. Any medical procedure that can make life better and easier is certainly worth it. I definitely recommend this Lasik procedure, and the competent team at Asian Eye Institute. 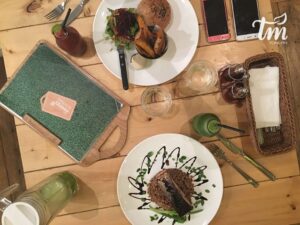 Sometimes, discovering more about a certain place does not involve walking around to see the sights. Sometimes, it’s your taste buds that do the exploring. This was the case for me in Brunei when I got to try The Energy Kitchen. This restaurant was at the top of my list of must-visit places during my trip. It is the only healthy, organic place… 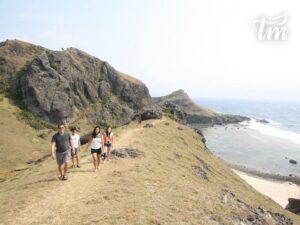 We spent our last full day in Batanes touring Sabtang Island, the southernmost island of the region. Just when I thought I had seen all the beauty that Batanes had to offer, Sabtang Island proved me wrong. There is only one boat trip from Batan to Sabtang, which leaves at 7:00 am and takes 30-40 minutes. The waves can get… 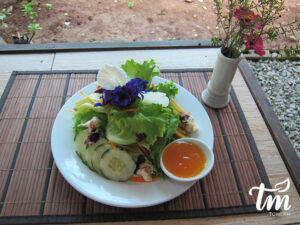 How many times have we, when stressed, take it out on food? When we’re chasing a deadline or multi-tasking, we order burgers with fries, a float, and a  sundae. Or when we’re emotionally distressed we head out to our favorite pastry shop and order the biggest slice of chocolate cake to comfort us. We may think these foods have comforted…